Don't be left out. Watch United Bank for Africa's CEO award ceremony which will take place on the 9th of April ,2016.
Here's what is written:
"With less than a week to the UBA CEO Awards 2016, Excitement is at fever Pitch. The Event staged at the Luxurious Eko Hotel,Victoria Island, 9th April ,is one of the biggest on the social calendar. Featuring a Host of celebrities and leading lights from all industry sectors gathered to celebrate the very best in leadership and business. REDTV is delighted to be streaming the event live from 6pm on Saturday night!That's right, simply tune into REDTV and watch the glamor and glitz of the evening unfold. This year promises to be the biggest night yet with a line-up that is entertainment with a capital E! D'Banj,Yemi Alade,Phyno and Dr.Sid are just some of the stars that are promising to blow the crowds away with explosive performances. And let's  not forget the Red Carpet- Check out your favorite celebs rock out dramatic looks straight from the catwalks. The Sauce Host Seyitan and Switch chatting to the guest live from the Red Carpet. At REDTV we believe in our viewers join in the fashionista fan-don't forget to rate or hate your favorite looks of the night. either below the line or by tagging us from your social media handle. the all important harshtag to us is #UBACEOAwards2016. Get ready for the D-day, Saturday 9h April,2016 by subscribing to REDTV today with sneak peeks ahead of the events itself and a line up and guest list to die for,the UBA CEO Awards 2016 promises to be turn!Up!"

Posted by Unknown at 03:40 No comments: Links to this post

I guess when Rihanna sang the song ,Thelma West would have it as her ring tone.  Enjoy this post as we reveal one beautiful Eve diamond dealer in business. 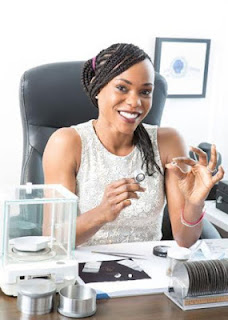 “Diamonds have fire,” said the daughter of a Guinness drinks company employee mother and a property developer and Industrialist Father.
“That stone is too flat but it’s got a lot of life in it, it was cut about 100 years ago,” she said, pointing to one tiny rock.
“This one cost just over £100,000 ($141,000, 126,000 euros), it’s got a low colour but it has been cut perfectly so it reflects light in such an amazing way.” 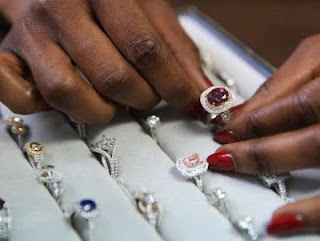 Discretion and security are essential, with the anonymous-looking building guarded by an encrypted intercom system and a reinforced door, all under the gaze of a bank of security cameras. West who has no fewer than 50 clients, 12 of whom are investors, have access to West’s knowledge. I can find a diamond and call them and say we have to buy this diamond, trust me’ and they follow me,” she said. Her multinational client base includes Swiss,Russians,Ghanians,Nigerians and a handful of French    West who's helped by a 10-woman team, West creates all of her company’s products, which come with a lifetime guarantee. Her most ambitious creation was a custom-made necklace worth around £2 million.

She plans to open a workshop in Nigeria, “where I’ll train girls in the art of making jewellery”.
West gives little away but also said she is creating “a revolutionary tool” that will help people in her business.
“That tool should be part of every diamond dealer and every shop”.

Posted by Unknown at 21:00 No comments: Links to this post