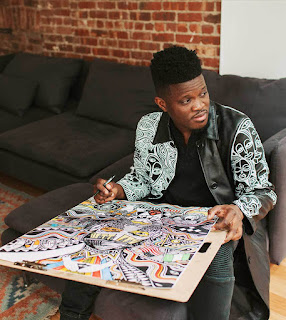 For Nigerian Artist Laolu Sebanjo , Art was has been a priority for him. Despite having a Law Degree from the University of Ilorin,which he only uses to back up his work i.e copyrights and Intellectual properties are protected,Laolu was athe type of child who sees faces in a random patterns on the terrazo tiles in the courtyard bathroom. One thing that fascinates him is the Ankara and Kampala pattern.
In December 2009, Laolu had his first exhibition at the Elephant House Ikeja, Lagos. Despite not selling a single art work that day, He didn't give up as his dream came true when the American Sportswear Company selected him as The Master of Air which will see him create Air-Inspired Air Max at the Air Max Con 2016.

Laolu whose style draws a lot from he African themes and tradition hence the name 'Afromysterics' which he coined in 2006-2007 .
From March 24-March 26,Laolu's work will highlight his African Roots as the world celebrates World's Nike popular Air max brand.  More Photos below: 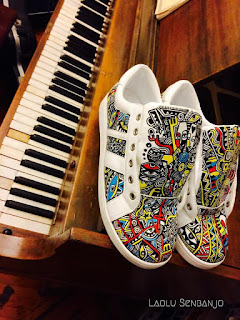 Isn't this beautiful? I love this and would prefer this to heels any day. I just want one African sneakers. Save the date. Lets support him.
Posted by Unknown at 08:12